Who is Laurie Moore-Moore?
Why does she have a double name?

Here’s how Laurie explains it, “Decades ago when I came into the business world there was another Laurie Moore in my field. Knowing this would be confusing, I decided since my maiden name was Moore and I married a Moore, I’d use Moore-Moore.  Pretty silly, but everyone seems to remember it! And no, we are not related.” 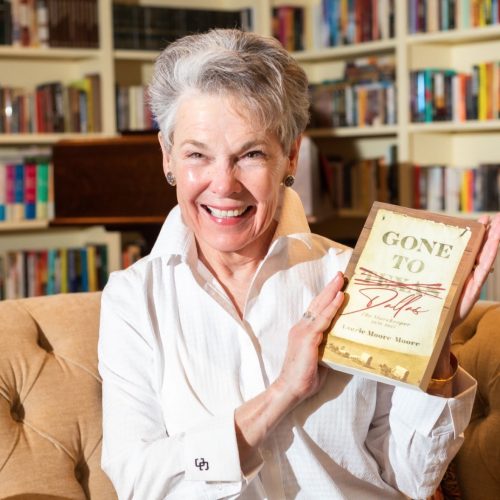 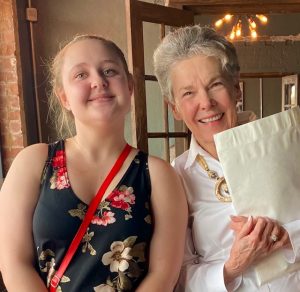 Laurie with her new author’s intern, Leslie Phelps, a senior at Northeastern State University, (Oklahoma) who is studying creative writing. 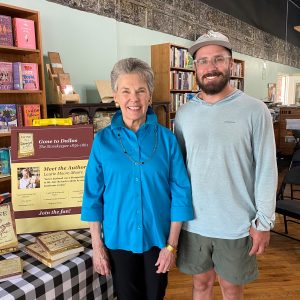 Laurie with her website editor, Alex McBride, the Marketing Manager for the Tahlequah Tourism Department. 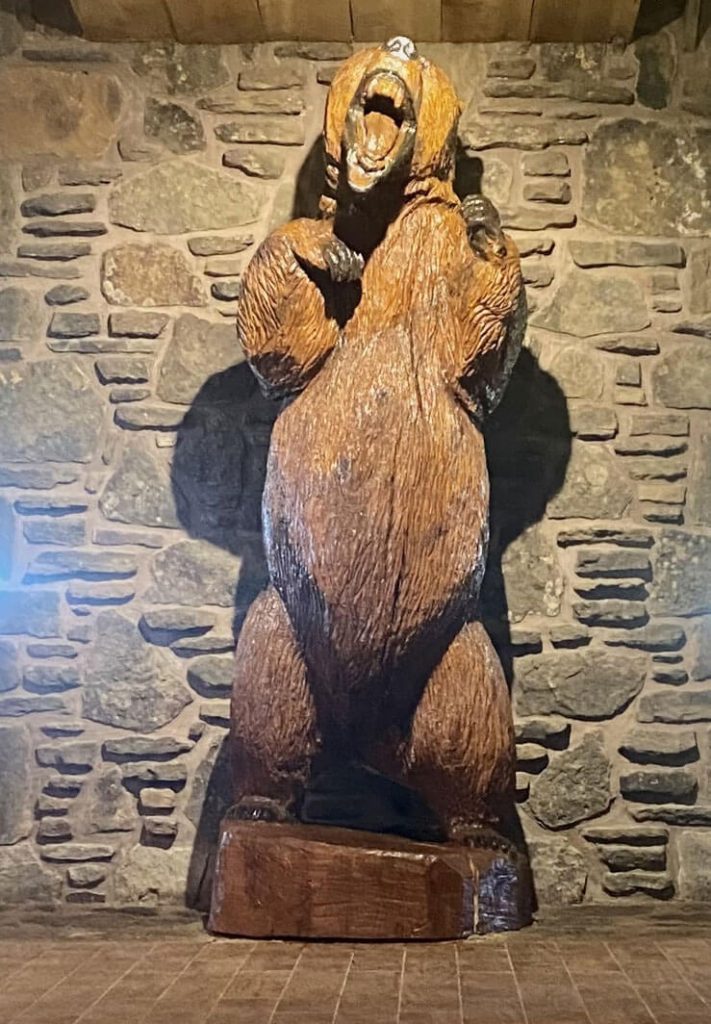 Our nine foot bear has a name!
Meet the nine foot bear that came with our cabin in “Indian Territory.” Quite
a surprise! Carved from a huge white oak tree, it was actually lowered into
place with a crane while the house was being constructed. Weighing about a
ton and a half, our bear is here to stay.
My husband Roger names his cars, ranch equipment, etc. . . .But alas, our
bear had no name, so I turned to visitors to this website for suggestions. A
“Name the Bear” contest was begun.
We have a winner! Kitty Galvin of Dallas (known to her friends as “Miss
Kitty”) sent in the number one entry. Henceforth, the bear will be known
YONA, the word for bear in the Cherokee language. Kitty’s suggestion seems
especially appropriate since we now live in the Oklahoma Ozarks on a
mountain top which is part of the original land granted to the Cherokee
Nation in the 1830s. The lake is near the current capital of the Cherokee
Nation—Tahlequah, Oklahoma.
Since we overlook Tenkiller Lake (named ofter an historic ferry crossing on
the Illinois River which was run by the Tenkiller family) we have given Yona a
surname. He is now Yona Tenkiller. If he look ferocious, he’s not. He is
simply laughing heartily over one of my husband’s many jokes. He may not
be Winnie the Pooh, but he is a happy bear and thanks to “Miss Kitty” Galvin,
he now has a name.
Kitty’s prize? She will be a character in my next book. Will she be a lovely
lady like Kitty, or will she be a real stinker? That’s still a secret. 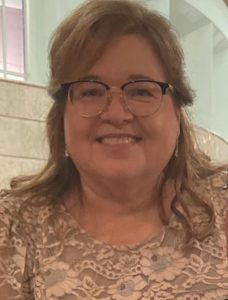 Texas-sized thanks and a tip of the cowboy hat to Kitty Galvin of Dallas, the winner of the “Name The Bear Contest.”

“My husband, Roger, and I have been blessed with many adventures in life—from treking across India’s Thar desert on a camel (and sleeping in the sand on our camel blankets) to repeating marriage vows in a remote Maasi village in Kenya (my dowery was one cow and one goat). My favorite adventure? As a fifth generation Texan, it is discovering more and more Texas history and writing about it!

For more than ﬁfty years we lived in big cities, but we now live on a mountain top in the Oklahoma Ozarks with a lake view and wonderful neighbors. I suppose my current adventures are learning to drive a giant mower and searching for the country girl in me.”

Laurie’s Business Bio (What she calls her previous life)

The Chicago Tribune dubbed Laurie the “Luxury Real Estate Diva.” After starting in the ad agency business, and serving on a US Presidential Inaugural Committee as one of several press liaison staff people, Laurie transitioned into residential real estate where she co-founded Real Trends, Inc., a publishing, communications, and consulting business which produces an executive trend letter for the top management teams of the national residential real estate franchises and major brokerages. The company also does annual research ranking the nation’s largest residential brokerage firms, runs multiple CEO groups, and hosts the premier cross-brand industry CEO conference. While at Real Trends, Laurie spoke to an average of 10,000 real estate agents annually across North America.

In 2002, Laurie sold Real Trends to her partner and started The Institute for Luxury Home Marketing. The Institute  provides the official luxury home marketing training for most of the nation’s residential real estate brands including RE/MAX, Keller Williams, Prudential, Sotheby’s, and many independent brokerages. Realtors who meet Institute performance standards earn the international Certified Luxury Home Marketing Specialist designation. Laurie sold this business to a private equity group in 2015.

For fourteen years, Laurie was on the Board of Directors of a major international corporation. She has presented at the New York Stock Exchange Governance Services conferences in NYC and at the International Shareholder Services (ISS) Corporate Governance Conference for ISS clients.